Situated strategically at the heart of the county, and bordered by the rivers Gipping and Rat, Stowmarket is a High Suffolk market town whose roots can be traced back to a possible Roman settlement. 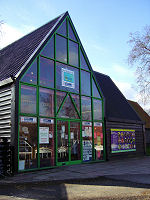 The Museum of East Anglian Life and Tourist Office

Starting at the Meadow Centre car park, the following walk takes you on a circular route past the town's main sights and shops. At a leisurely pace it should take about an hour.

The car park is pay and display, but free on Sundays and Bank holidays, and there are public toilets nearby. A small market occupies the centre of town every Thursday and Saturday throughout the year, and The Museum of East Anglian Life hosts a Farmers Market on the first Friday of every month.

From the car park, head up the slope between the supermarket and The Museum of East Anglian Life. The main entrance to the museum also serves as the tourist office, which offers plenty of free local information. To your left are the public toilets.

Continue straight on down the short fenced path, at the end of which you will find yourself at the entrance gates of Abbots Hall. Dating from the early 18th century, this building has acted as Stowmarket's manor house and has been occupied by many affluent landowners. 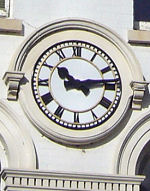 With your back to the gates, head down Crowe street to the market place. The Old English word "Stow" translates as a "meeting place", and this central area was once the focus of local activity as well as where members of Parliament were elected.

Looking round, you can see a number of 18th and 19th Century buildings, including the former post office whose facade features the Town Clock. This was funded by public subscription in the late 19th Century because of the unreliability of the clock on the church tower. 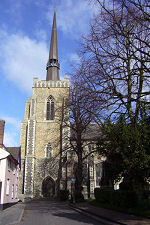 The church of St Peter and St Mary

Cross straight over the market place and up the Buttermarket pedestrian alley towards the church of St Peter and St Mary, whose size reflects Stowmarket's medieval prosperity thanks to the wool and cloth industry.

The churchyard originally contained two church buildings, but St Mary's was demolished in the mid 15th Century while St Peter's survived to be rededicated.

Turn right and follow the pavement round, passing the yellow brick former corn exchange on your right, and then turn left at the library and walk through the church grave yard.

On reaching Station Road, note the light brick building on the opposite side. This was the old Stevens Brewery which included a well 330 feet deep, originally dug to obtain water for brewing, and which later became Stowmarket's water supply.

Turn right and continue down the hill until you reach the traffic lights. Cross diagonally onto Gipping way, then almost immediately bear right down the footpath. Note the house to your right with the black plaque, the sole survivor of several demolished medieval buildings which once stood on the opposite side of the road. Follow this road round to the right,cross over the river Gipping and continue to the end of Stowupland Street.

A Pyramidal Kiln Roof on the Malting Buildings

Carefully cross the road and enter the car park of the Railway Station. Designed by Frederick Barnes and completed in 1849, using local red and white bricks, this is widely considered to be one of the finest examples of Victorian country station architecture in the country.

Leave the station car park through the main exit and head towards the traffic lights.

On your left you will pass the white buildings of the Union Street Maltings with their impressive pyramidal kiln roofs. When Stowmarket gained its canal the maltings industry bloomed, and this remaining kiln was the last of over fifty similar operations to be closed.

On reaching the river, turn left down the steps to the riverside at the back of the Maltings, and follow the towpath to the footbridge.

Cross the bridge and straight over the main road, turn left and then first right up Milton Road South.

The Stowmarket council building you will pass on your right is the former Old Vicarage, which was frequently visited by the poet, John Milton, between 1627 and 1655 when it was home to his tutor and close friend, Dr Thomas Young.

Statue in the Old Fox Yard

Turn right at the T junction and walk down the main high street until you reach the entrance to The Old Fox Yard. During the 18th century The Fox coaching inn stood here, and from its yard a daily coach, "The Regulator", ran to Bury St Edmunds and Ipswich.

Cross over the road and turn off at Marriotts Walk on your left, along which you will reach a grass triangle where the historic Suffolk game of Campen, a rough version of football, is said to have once been played. Turn right, and take the narrow footpath which brings you back to the gates of Abbots Hall and further along to your starting point in the Meadow Centre car park.